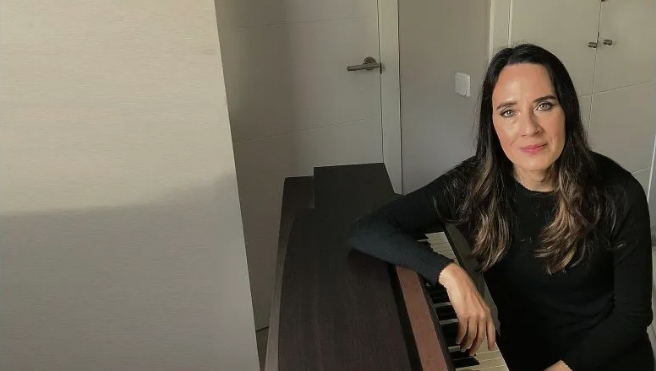 You can also download the article in pdf format at this link. .

The Tarragona pianist launches ‘Vision’ with the record company, a work full of her own compositions.

«I feel very free and I am very happy creating music», said María Parra in a conversation with this newspaper last August. One facet, that of composer, which has not gone unnoticed in the music industry. Now, eight months after that interview and in the midst of an international crisis, the pianist and performer from Tarragona has signed a collaboration contract with the record label Warner Music Spain that commits both parties for the coming years. At the same time, she has signed another editorial contract with Warner Chappell Music Spain, who will be responsible for ensuring her author rights.

«The agreement was before the arrival of the coronavirus», says the artist. «Initially, the release of the physical album was scheduled for May 15, with a presentation in style in Madrid on the 19th», according to the news. Of course, the Covid-19 pandemic has forced a change of strategy. «We wanted to be cautious and a schedule has been drawn up, and we will respect it», she says.

Vision is the third album of the Tarragona artist, the first one with her own compositions, a work that will be released on July 3 on digital platforms and we will have to wait until September to acquire it in physical format.

Nevertheless, as an appetizer, next week, on May 13, María will premiere on YouTube and Spotify the single and video clip Light at the end of the tunnel that is not included in Vision. And on May 17 (7pm), the artist will offer a live concert from her home with part of Vision, which can be followed through her personal Instagram and Facebook accounts, as well as on Warner Music Spain’s social networks.

Light at the end of the tunnel is a theme born from the emotions experienced by the pianist in the midst of the pandemic in Madrid, where she resides, a composition that, as Warner affirms, «expresses the hope of resuming life with a more conscious vision after confinement. Whether reconstruction is for the better will depend on ourselves.

On May 17 (7pm), a live concert from her home with part of ‘Vision’. It can be followed on her social networks and those of Warner.

However, it was not easy for her to work during the hardest days of the health crisis. «The world fell at my feet», she reveals. «Already confined I made a first concert on March 22 to contribute to the public in their homes and also to have a sense of normality and I decided to compose outrageously as I have done in the last year and a half. And I could not».

All of a sudden, the artist was unable. «I realized that creating requires a state of great inner joy, of great harmony, it is still a surrender. So if you are soaking in pain, it is very difficult. In my case it was not fear, but I felt a lot of pain and a lot of suffering».

But little by little, María also saw a little light at the end of that tunnel and allowed herself to get to work. «I wrote a song called Confinados-confiados (Confined-confident) and also Empty Streets because you saw New York, Barcelona, Madrid… The streets everywhere empty. After Easter, when people started going out again to go to work, Light at the end of the tunnel came. When I explained it to Warner they loved it and they decided to release it as a single, since the album was closed», she points out.

As always happens in these situations, behind such a contract there is hard work. And the case of the Tarragona artist is no exception. Thus, María Parra explains the way, not always placid, up to the present time.

On May 13 the video clip ‘Light at the end of the tunnel’ will be released, and on July 3, the digital album

«It is assumed that I have always been a pianist with a career in the classical sphere, regardless of whether I am known in Tarragona as the manager of the Bouquet Festival. But even as a teenager, I was always caught by the bug of the other musics that you obviously listen to, starting with The Beatles, Dire Straits, Genesis, The Police, Pink Floyd… Everything I’ve been listening to throughout my life.

And when I was 16 years old I started to need to know about other things, besides classical music», she recalls. Thus, she went through the Barcelona Music Workshop, traveled to New York and Paris, always learning, from the world of classical, but at the same time improvising and composing. «Little by little, in my classical concerts I was introducing my creations in the encores, but very timidly because in the classical sphere everything is assimilated very slowly, so immediately anything different goes beyond what is stipulated. I knew that what I composed was not going to be considered contemporary music in the classical sphere. But then, what name did it have? What could I call it?», the pianist asked herself.

The answer to her fears was found in the feedback with her own audience to finally offer concerts only with her repertoire. In Warner‘s words, «Vision is a review of her own existence, which musically takes shape, adding with amazing naturalness jazz, flamenco, Celtic, pop and folk, to the classical substratum on which she has formed her career. This piano of feminine sensitivity creates a new sound, with recognizable echoes, and presents a different and exciting way of seeing classical music. Through her vision, María Parra tells herself».