23 November 2016 by Montana in Interview 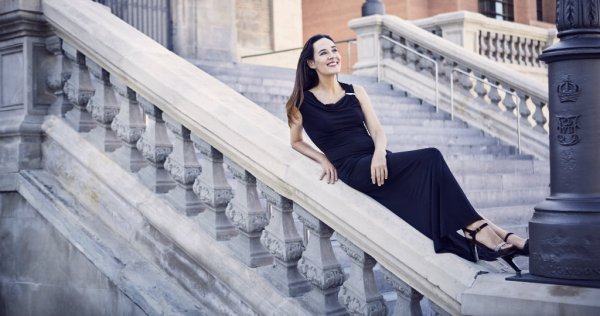 I have listened to the album with much attention and no less satisfaction. María Parra immerses us in a sound universe that invites intimate thought, intense and kaleidoscopic feeling, full of nuances and intensities, and the understanding of a secret world that slips between the conscious and the unconscious. Something that can be summed up in the title chosen by the pianist for her second record production: “Mouvement”, and which is very well explained by Félix Ardanaz in the notes to the program that appear in a carefully documented script that accompanies this record project when he says:

“For the interpreter, the term “Mouvement” refers to the realization of a dream or a materialized desire, but at the same time it immerses us in the cultural halo of Paris in the late 19th and early 20th centuries. Precisely, it was an aesthetic and cultural movement that shaped Paris as the undisputed cultural capital of the moment. It is Art Nouveau, which was born in the context of the Universal Exhibition in Paris in 1889. […]

“In this bohemian Paris, hinge between two convulsed centuries, the most important artists of the moment coexist […] This was the case of the three composers who have a place on this album: Debussy, Granados and Manuel de Falla fed each other with admiration and respect, drinking from the sources of Impressionism, Spanish nationalism and snippets of Central European romanticism. “ […]

It is evident that the approach to this aesthetic universe obliges the interpreter, not only to a very refined piano technique, a necessary condition for an excellent performance, but also to something that goes beyond technicality and that has to do with sensitivity and commitment to contextualize an aesthetic as complex as the one reflected in this album.

To this must be added the need for an in-depth study of the music of these composers. If, in addition, as in the case of María Parra who perfected her studies in Paris with the professors of the Conservatorio Superior Jacques Rouvier and Prisca Benoit, which somehow brings and immerses our pianist in a musical environment inheriting, among other circumstances, that Late Paris, lived by the composers of this album, we will agree that María Parra treasures all these qualities necessary to make this album, and its interpretation, something exceptional.

We are facing one of the most important pianists and composers on the international music scene, whom we congratulate on this album from here, and we hope that soon we will be moved by a new recording.