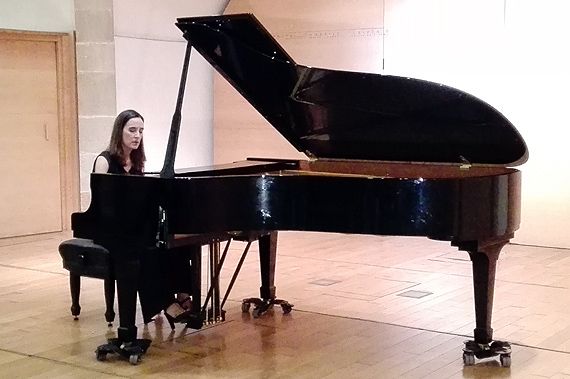 Article in the Revista Cambrils on the occasion of the presentation concert of “Mouvement” in Cripta de Cambrils. Signed: Josep Maria Ferrando.

The Cripta de l’Ermita hosted, last Sunday evening, as part of the Autumn Concert Series, a piano recital with the pianist and composer María Parra Peñafiel, who presented her second record “Mouvement”. It is a tribute to the artistic movement that developed in Paris between the late nineteenth and early twentieth centuries, in a cultural environment where Impressionism and Central European Romanticism arose. The music of Spanish and French authors formed this “Mouvement” with musicians such as Claude Debussy, Enrique Granados and Manuel de Falla.

The virtuosity achieved in her long career as a pianist means that María Parra transports the public to this Parisian and Spanish musical environment, masterfully performing various pieces by these three universal musicians. Among others, the same “Mouvement” by Claude Debussy, “Danza núm. 2 La Oriental” by Enrique Granados or several pieces from “El Sombrero de Tres Picos” by Manuel de Falla.

Once again, a top-level concert that made the audience enjoy, who said goodbye to María Parra’s concert with applauses. The Culture Department of Cambrils City Council was the organizer of the concert.