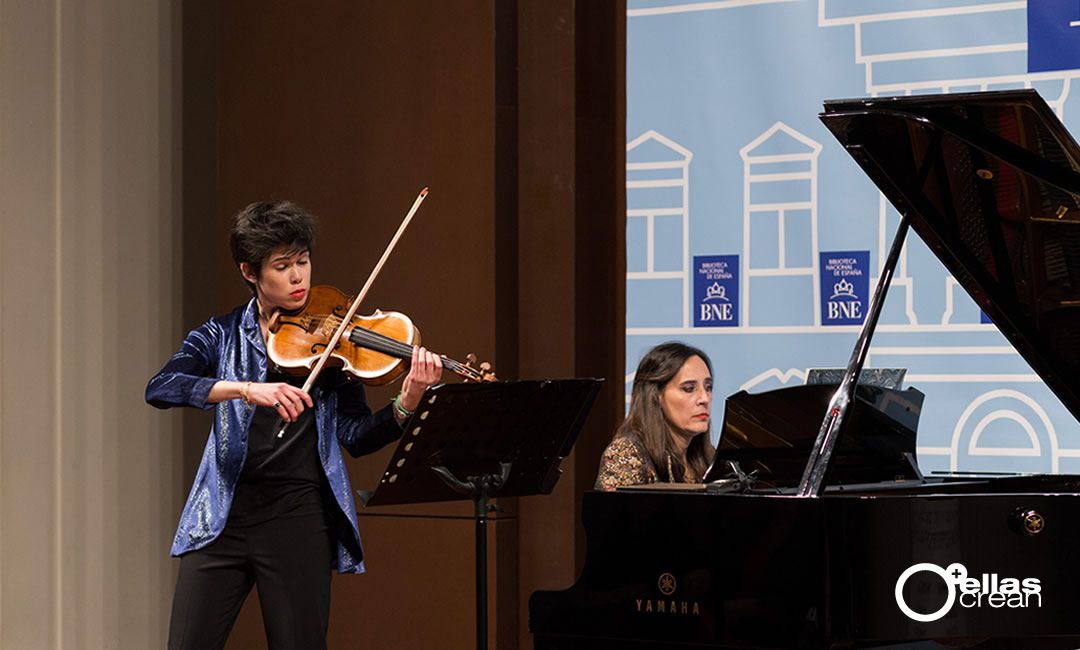 «Do emotions have form?». Review by Fernando Íñiguez of the concert that took place on March 28th at the National Library of Madrid at the Festival “Ellas Crean”.

Isabel Villanueva always liked the sea, although she was from the inland. María Parra always lived on the shore of the Mediterranean. From a young age Isabel began to express her emotions and desires with the viola. In an almost singing way, because probably that is the instrument that most resembles the human voice. María chose the piano, and spent her life recreating the classics. Each one separately, and without knowing it, were united by the sea, the freshness of its breeze and the smell of salt.

Music brought them together. Life. They wanted to find their common points and the friendship served so that María could also compose for viola and piano, thinking of Isabel. The sea rose between them again, and Isabel inspired María with that delicate and exquisite piece called Blue sea.

Yesterday afternoon they performed it again thanks to the reunion between them led by the Ellas Crean Festival. The command that both showed, each with their own instrument, in the National Library was overwhelming, but the most beautiful thing, beyond the technique and virtuosity of both, was that ability to move from their complicity and shared sentiment. Two women uniting their art in pursuit of beauty, exactly what we need now in order to look at the world of now.

They started with a short but very dynamic romance by Clara Schumann, of whom two centuries have passed since her birth this year. Quite a declaration of principles: at the festival celebrating female creation, a composer overshadowed, perhaps, by the historical importance of a husband like Robert Schumann.

They then went through the most vibrant Granados, the most mundane and bohemian Piazzola, and even arranged the viola for the Sarasateana suite, by the violinist and composer Efrem Zimbalist, with so many Hispanic echoes. Each had their time alone. Villanueva discovering the young Bulgarian composer Dobrinka Tabakova, and Parra offering us some of the compositions she created for her next album: the cosmic connection of Stars, the return to childhood and innocence of Carrousel, and the endless waltz of Wind Travellers that does not express anything other than the evolution of life.

But it was the two pieces expressly created for Isabel by María the ones that perhaps caught the most attention. The aforementioned Blue sea, with the entire Mediterranean within, and the raptured Azahar (Orange Blossom), which premiered worldwide yesterday. Flamenco passion, which unites both of them, and rock vibes. They also repeated it at the end in the form of a second bis. In Azahar there is duende and jondura, with a bow rubbing the string in electrifying bursts, almost to blows, and a subtle and elegant piano, but also evocative and charged with Arabizing echoes. Power and modernity. A kind of metaphor for the times of encounter and tolerance that should prevail now on the planet, instead of so much confrontation.

But before that end, Parra and Villanueva took us to the island dreamed of by all, Youkali, that country that Kurt Waill imagined full of harmony and happiness. Where one dreams for dreaming, where it can be believed that it is true that color was invented seeing how Isabel’s bow moved and the bird fluttered from María’s hands on the keyboard.

A viola and a piano, two women, gave shape to emotions yesterday. Yes, it is possible. It is real: emotions have shape.